LYD is on the floot. It's the first day of NAMM 2018 and we've walked the halls to find exhibitors who rely on our LYD-series to demonstrate their products - it's tough auditioning a keyboard without sound. 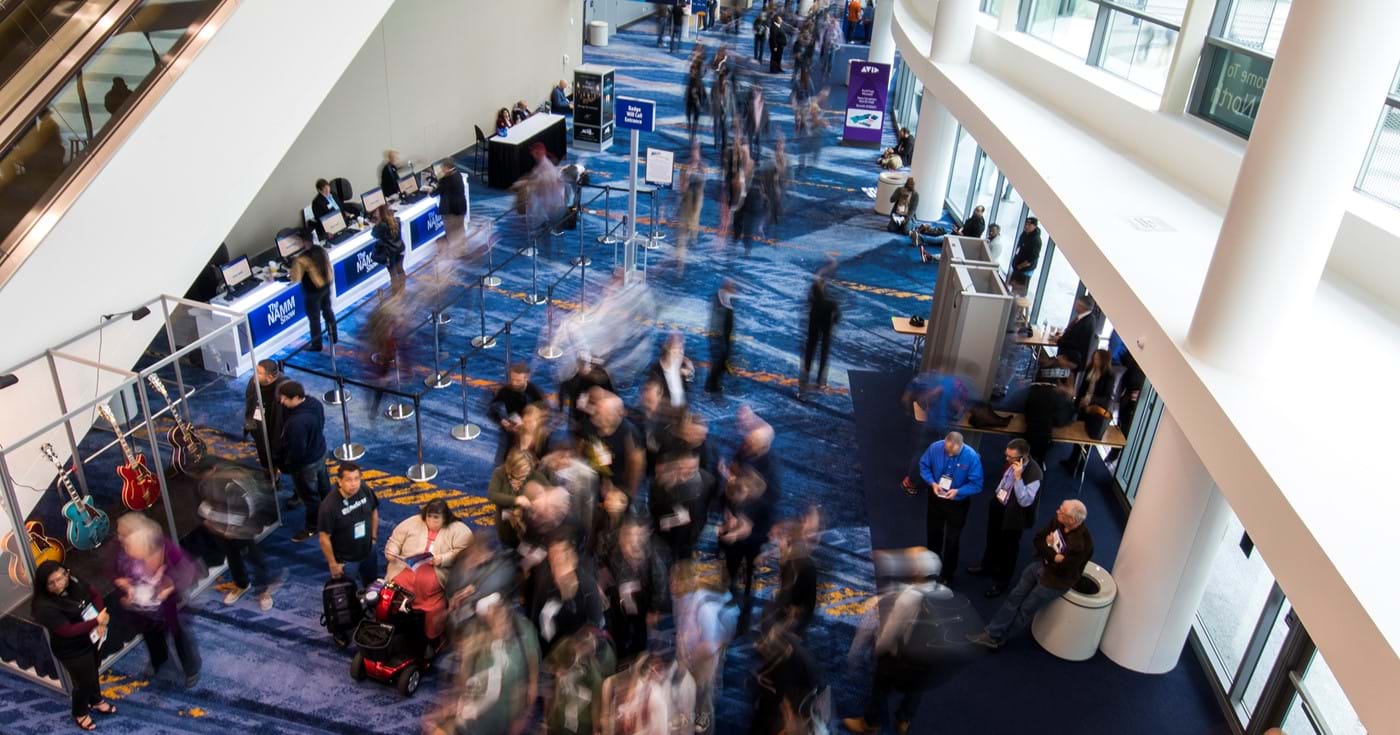 Luckily, we found several exhibitors who had chosen LYD monitors to demonstrate their magnificent gear. Below, you can read why they chose to use Dynaudio for the booths here at NAMM 2018.

The first booth we visited was Two Notes Engineering, a French effects pedal company. One of their top-selling products is a cabinet simulating pedal that makes it possible to get a great guitar or bass sound without playing through a cabinet.

While this solution is great for playing live if you use an in-ear system, it is obviously also very useful in the studio for tracking without having to put up microphones in front af a cabinet. Not to mention that you can actually track at home without disturbing your neighbours.

In fact, it correlates extremely well with the whole philosophy behind our LYD range, as they are designed to reproduce a super accurate mix even at low volumes. Combining the two, you could record your soaring guitar tracks in your home studio at a low volume and still get a killer result when you play back your song at loud volumes on other playback systems.

No wonder Two Notes Engineering chose to demonstrate their gear on LYD 48. Let's find out how this setup works for them at the NAMM show! 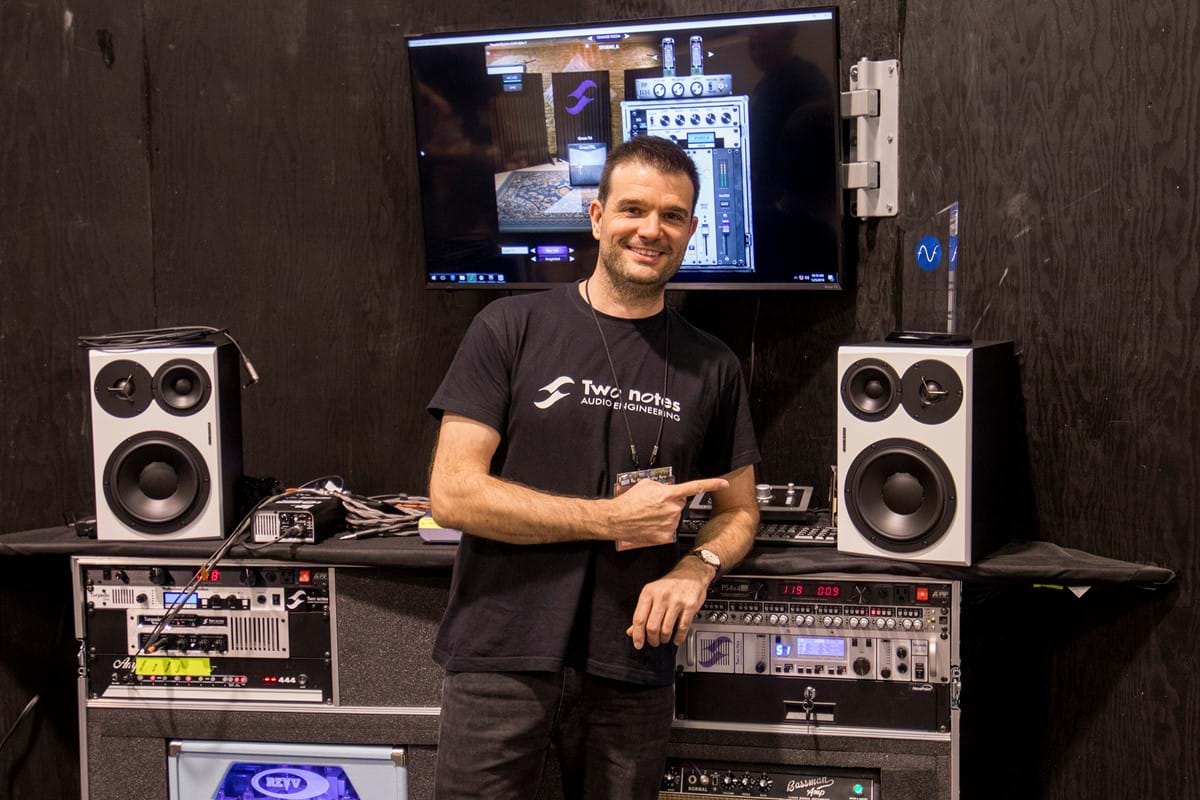 At the Two Notes booth we met with their CEO Guillaume Pille.

What LYD speakers do you use at the booth?

We need monitors that work great not only as a mixing tool, but also at a listening tool, and the LYD 48 covers both areas.

First off, we already know how these monitors sound and work, as we have them - together with a BM9S II sub - in our Two Notes studio back home. And I also use a pair of LYD 7 monitors in my personal studio, so setting up was easy. Just a matter of connecting the cables and we were good to go.

The speakers are far enough from the wall to have the 'Free' setting, and other than that it is all set to default with normal Sound Balance and neutral Bass Extension settings.

What is your main news for the show?
Our most popular range, the Torpedo products, now comes with a new, updated firmware that allows our users to have two microphones on one cab, which is something there has been a lot of demand for among our user base. And actually, the firmware update is free for all existing users so everyone will be able to benefit from the new firmware version.

We need monitors that work great not only as a mixing tool, but also at a listening tool, and the LYD 48 covers both areas.

The sound is very focused and with great clarity even at low volumes.

Elektron has really taken the electronic music sphere by storm in recent years. Their innovative approach to both analog and digital synths and drum machines has  changed the way many work and their reputation is to be very inspirational as well as great-sounding.

In fact, several of the Studio Masters that we have interviewed are Elektron users, including Detroit Swindle and Camea.

Further, the door swings both ways, as we have an Elektron Analog Drum Machine installed at our booth in order for visitors to audition the LYD monitors, using a piece of music production gear in addition to complete tracks.

OK, back to Elektron's use of LYD monitors at their booth. Let's learn more about which monitors they use and how they perform on a busy trade show floor. 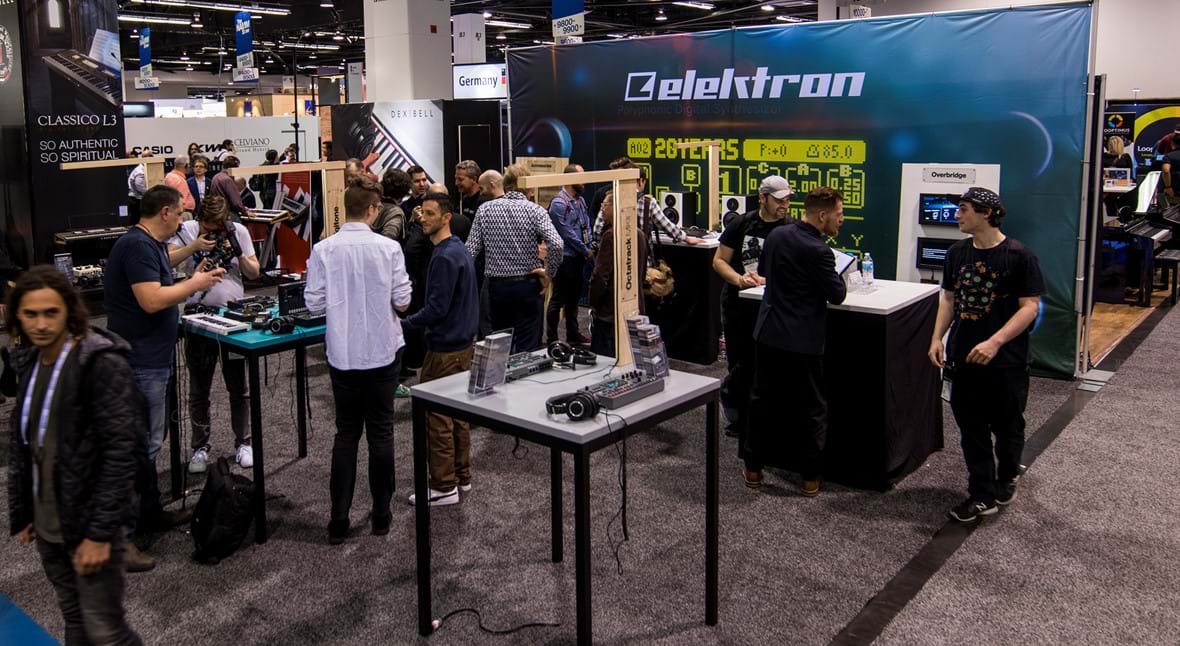 At the Elektron booth we met with Head of Marketing Gustav Brengesjö.

What LYD speakers do you use at the booth?

We have the LYD 8 in the white version, as they fit the booth perfectly from a visual standpoint.

Great! We have used the smaller LYD 5 at previous trade shows, but knowning that NAMM is a quite loud show, we decided to go for the larger LYD 8 to make sure that the great clarity and punch of the LYD sound would come through the noise on the floor.

Yeah, we just plugged in the cables, turned on the power and listened. Then decided that we were good to go!

We use the same setting as we found to work the best with the LYD 5 in the past, which is flat all the way through. Our machines have quite a lot of bass to begin with so it is not necessary to use the Bass Extension to exaggerate the low end.

What is your main news for the show?

Digitone! Our take on an FM synthesis, along with a built-in step sequencer, in a single box that is very user-friendly and intuitive.

Arturia originally started out making virtual instruments, focusing on classic, analog synthesizers such as the Prophet 5, ARP 2600 and not least the Modular based on the iconic Moog from the 70's.

Today, however, they have expanded their territory significantly by adding numerous more analog synth emulations along with piano and electric pianos, including Rhodes and Würlitzer, as well as a range of organs such as Farfisa and the classic Hammond B3.

And not only that. Arturia has also taken the step into the world of hardware, creating audio interfaces, synths, controllers and drum machines.

In short, Arturia is easily one of the brands on the shortlist of most electronic producers, as well as instrumentalists and vocalists with home-based studios.

We teamed up with Arturia in their dedicated demo room, which is situated off the tradeshow floor in order to offer a more acoustically friendly environment where several LYD speakers help make their gear sound its best. 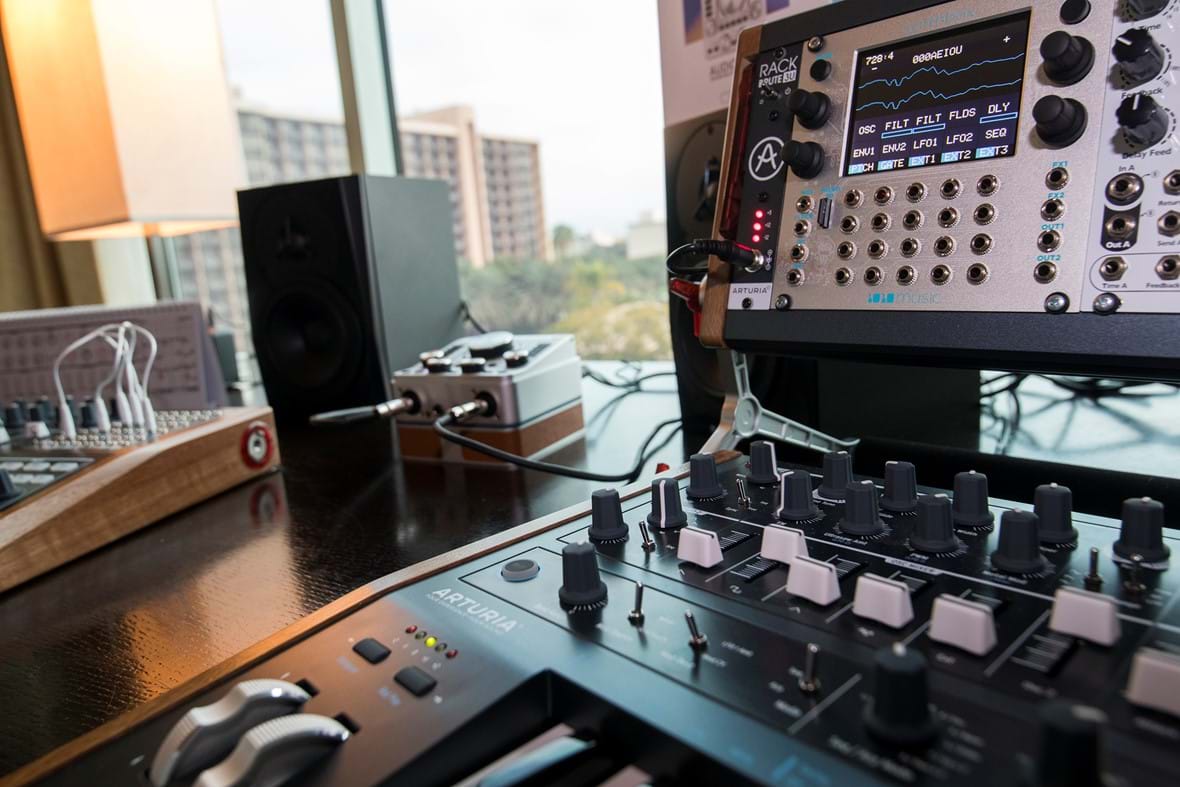 At the Arturia demo room we met with Marketing Manager Bryan Borcherds.

What LYD speakers do you use in the demo room?

They work very well. in this situation where we are not in a very loud tradeshow hall. The sound is very focused and with great clarity even at low volumes. I don't know how you guys have done it, but when we set them up in the room, we were very surprised how much bass we got from such a small speaker cone.

We just did the plug 'n' play drill. We didn't find a need for trying to alter the sound of the speakers as it was right out of the box.

We actually never touched them, as we simply got the sound that we wanted as soon as we turned them on.

What is your main news for the show?

We are launching the Mini Brute 2 synthesizers. One is a classic hardware synth with keys and another without keys, but with a built-in step sequencer. We also launch the Rack Brute which is a 3U and a 6U rack-holding unit for people who are into the Euro rack equipment.

We're also very happy to report that in the midst of the craziness of this show, a lot of visitors found their way to our booth and that we have received tons of great feedback from existing Dynaudio users, as well as from those who came to listen and is aiming for LYD monitors in their own studios.

So long for now, but please stay tuned, as we'll be back with more from the show tomorrow! 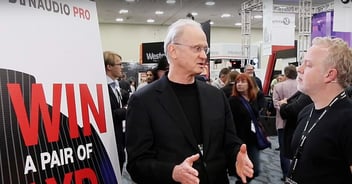 Carl Tatz is a leading studio designer who uses the revolutionary PhantomFocus System™ to help tune any speaker to any environment. The system ...
Read more 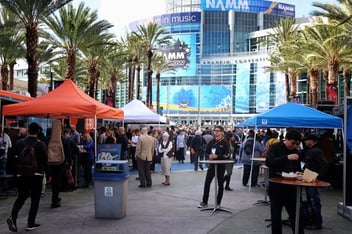 We’re in Anaheim, California for the annual NAMM show. However, this year we’re hosted by Yorkville, who is our American distributor. But, that’s ...
Read more 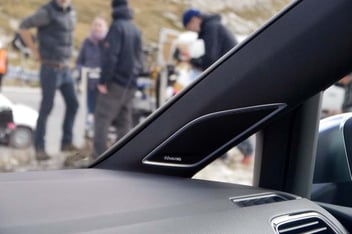 For all those who still can´t believe it... Here a shot taken during a TV sport production theses days with a Golf R and Dynaudio on board. The Golf ...
Read more
disable_modules: